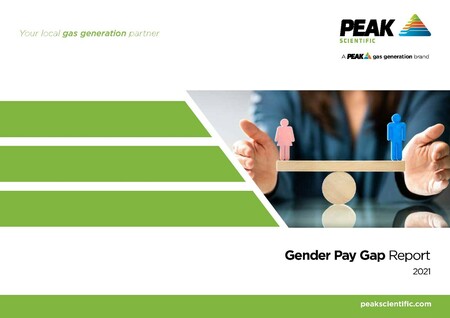 Your local gas generation partner
A

PEAK Scientific Gender Pay Gap Report 2021
PEAK Scientific is committed to continuously promote and create an inclusive environment. It is within our culture to promote equitable
opportunity for progression to all employees, and eliminate any form of discrimination in the work place.
Our ability to attract and retain talented people is key to ensuring the continued success of our business. We therefore strive to ensure a fair
and equitable approach to all our people policies and practices including recruitment, reward and development.

About the Gender Pay Gap
The Equality Act 2010 (Gender Pay Information) Regulations require UK Companies with more than 250 employees to publish a report on their
gender pay gap in April each year.
We are required to collect and report on pay data collected at a snapshot date of 5 April 2021.
At that date we employed 275 colleagues. Of the 275 colleagues, 270 were used for the calculation of hourly rate, this was split between 198
men and 72 women. 5 colleagues were excluded as they were receiving less than full pay, caused by sick leave and maternity leave. Of the 5
excluded this was split between 3 men and 2 women.
Gender Pay and Equal Pay are often confused, but it is important to remember that these terms are not interchangeable. The gender pay gap
is the difference between the average earnings of men and women across a workforce, irrespective of what they do (regardless or seniority,
experience or role).
In contrast, equal pay focuses on men and women being paid equal amounts for doing the same or similar role.

This table shows the % of men and women in each hourly pay quartile, from the lowest paid quarter of colleagues (Lower) to the highest paid quarter of
colleagues (Upper).
As you will see from pie chart showing our overall gender split, our workforce is predominantly male and this is also reflected in each of the pay quartiles. Many of
our colleagues work within our manufacturing, warehouse, and engineering teams, which are, traditionally, predominantly male. We face the continued challenge
of trying to encourage women to take up employment in our male dominated industry.

Median Gender Pay Gap in Hourly Pay: 10%
The median Gender Pay Gap in calculated by creating a list of the hourly rates of pay for both men and women in order from highest to lowest, and then
comparing the pay of the women and men in the centre of each list.
According to the November 2020 Office for National Statistics (ONS) Annual Survey of Hours and Earnings (ASHE), both PEAK’s median and mean gender pay
gap are well below the national averages:

The main reason for both of these gaps is that we have more men than women currently occupying senior leadership roles in the top two pay quartiles.
Page 4

Bonus Payments
The bonus payments used for the purposes of the calculation were paid between 6 April 2020 and 5 April 2021.

Bonus Payments
Mean Gender Bonus Pay Gap: -14.5%
The mean Bonus Gender Pay Gap shows the difference between the average bonus pay paid to male and female employees. It is calculated by
taking the average of all bonuses paid to both men and women.
This means that on average, women at PEAK Scientific earn 14.5% more bonus pay than men.
PEAK operates an annual discretionary performance bonus based on company and personal performance. In the preceding bonus period some
additional exceptional bonuses were paid to individuals for delivery over and above their role responsibilities. The number of women receiving
these bonuses was proportionately higher than men, which favours the average female bonus. We would not anticipate this gap to be as big
next year.

Median Gender Bonus Pay Gap: 0%
The median Bonus Gender Pay Gap is calculated by listing the total bonus payment for each male and female employee in order from highest
to lowest and then finding the number in the centre of that list.
This means that using the median, women at PEAK Scientific earn 0% more bonus pay than men.
The median male bonus was the same amount as the median female bonus.

What are we doing to address our gender pay gap?
We are confident that colleagues across PEAK Scientific are paid fairly, both men and women, but we acknowledge that, at present, we have a small
Gender Pay Gap. While significantly less than the national average, the Company remains committed to reducing the pay gap.
There is no single quick fix, but through analysis and appropriate intervention, we will continue to demonstrate our commitment to improving the
gap, and in particular by encouraging women into roles in what is a male-dominated sector.
We remain committed to recruiting more women across the whole of the organisation and to further developing our culture to ensure it is conducive
to the progression of both men and women equally, as well as recognising and celebrating other aspects of diversity.
We continue to partner with organisations such as STEM which actively encourage and support females into careers within Science, Technology,
Engineering and Mathematics. We will seek to support initiatives in our industry that support developing the diversity of new recruits to our industry
and our business.
PEAK is committed to supporting the objectives of the 30% club which aims to boost the number of women in board seats and executive leadership
of companies all over the world. PEAK currently has 33.3% female representation at this level.
We recognise a way to support women in our workplace is to offer flexibility. PEAK is committed to helping all employees maintain a balance
between work and home life. One way we support this is by offering variable start times to allow colleagues to better manage their personal or
family circumstances.
The impact of Covid-19 helped us accelerate the development of a more flexible working culture. We have now introduced a Hybrid working policy
in which colleagues can split their time working 3 days per week in the office, and 2 days per week from home.
We have a flexible working policy and will continue to support individual requests where possible.
We will continue to regularly review pay and remuneration practices to ensure fair pay and reward for everyone.
This statement has been prepared and published in accordance with the Equality Act 2010 (Gender Pay Gap
Information) Regulations 2017.
I confirm that the data and gender pay calculations are accurate.