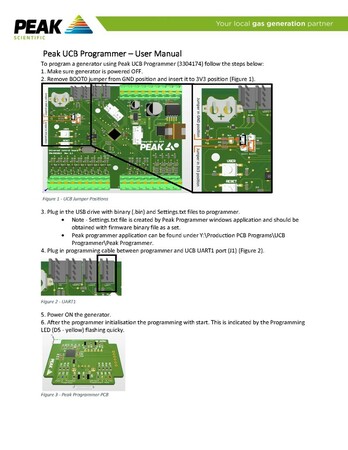 5. Power ON the generator.
6. After the programmer initialisation the programming with start. This is indicated by the Programming
LED (D5 - yellow) flashing quicky.

7. After programming is finished the Programming LED will become solid and verification process will
start. This is indicated by Verify LED flashing quickly (D6 – green).
8. After verifying process is finished, Verify LED will become solid and readout protection will be
enabled.
9. Once programming has been successful, both Programming and Verify LEDs will blink briefly 5 times
followed by longer delay indefinitely.
10. Generator can be powered off and the programming cable removed.
11. Remove BOOT0 jumper from 3V3 position and insert it back to GND position.