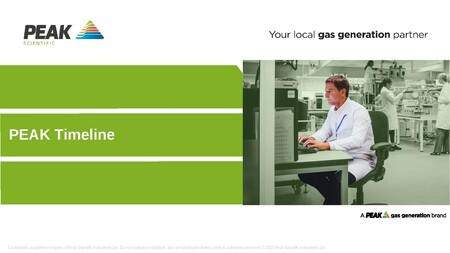 corporate, powerpoint, slide-deck, slides, boiler plate, overview, company, profile, slides, ppt, slidedeck, about, about peak, peak overview, who we are, who is peak, who are peak, who

This is intended as a 'boiler-plate' standardized set of slides to present Peak in corporate or customer presentations. It provides an overview of the timeline of the business and our values. These slides are updated regularly, please ensure you download directly from here prior to each use.

Founded in 1997, PEAK Scientific has continued to grow to become the leading innovator in the
design, manufacturing and support of high-performance gas generators for analytical laboratories,
with direct operations in every continent around the world.
This growth has taken over 20 years to achieve, and PEAK has continued to innovate every step of
the way while keeping our values at the heart of everything we do.

Fun & Passion in everything we do

Milestones
1997
The company was founded as a dedicated
gas generator manufacturer - owned by Alan
Farrow an operating out of 10,000 square feet
at Inchinnan

2004
PEAK was acquired by Robin and June
MacGeachy and, in that same year, was
awarded its first Queen’s Award for
Enterprise in International Trade

Milestones
2005
PEAK saw steady expansion in North America,
establishing PEAK Scientific North America as
the first company outside the UK.
PEAK embarked on decade of ambitious
growth, with a headcount of 50 employees and
a turnover of £5 million

2007
PEAK opened its first office in New Delhi
through PEAK Scientific India and, in the same
year, was awarded the second Queen’s
Award for Enterprise in International Trade

Milestones
2009
PEAK Scientific’s presence in India grows
with the opening of the second office in
Hyderabad; growth in America results in our
PEAK Scientific North America colleagues
moving to new premises

2010
The start of the new decade was an exciting
one with the launch of the Genius series,
PEAK’s most successful product with over
15,000 units in field
PEAK saw its employee head count reach 100
with the establishment of several new offices:
PEAK Scientific Mexico, PEAK Scientific China
and PEAK Scientific Hong Kong.
With this growth, PEAK saw an Annual Sales
Turnover of more than £10 million

Milestones
2011
In the same year that PEAK was awarded the
third Queen’s Award for Enterprise in
International Trade, PEAK Australia was also
established

2012
PEAK continued to expand its global footprint
with new offices opening in Brazil, Germany,
Japan and Singapore – increasing the
employee head count to 150.
This continued growth resulted in an Annual
Sales Turnover of more than £15 million

Milestones
2013
PEAK upgraded their HQ facilities to meet
increasing sales and service demands from the
global marketplace and, subsequently, saw its
employee headcount reach 200.
In the same year PEAK introduced the
Precision Series to the global GC market we
also opened in Canada, France and Spain.
2013 also saw the opening of the PEAK
Industrial premises.
This rapid expansion saw PEAK hit another
milestone with an Annual Sales Turnover of
more than £20 million

2014
PEAK’s continued growth, the second largest
global market share, was recognised with its
fourth Queen’s Award for Enterprise in
International Trade as it saw PEAK’s employee
headcount grow to 350 and its Annual Sales
Turnover reach more than £30 million

Milestones
2015
With 16 dedicated offices globally and PEAK
trained service engineers in over 20 countries ,
PEAK focused on becoming a leading global
partner, serving customers directly and locally.
This resulted in the opening of PEAK Abu
Dhabi, the opening of a new HQ in New Delhi,
and the relocation of our offices in France,
China and Australia

Milestones
2017
2017 saw PEAK celebrate 20 years in
business with more than 400 employees, 20
global offices and a turnover of over £46
million.
PEAK continued to grow with businesses being
registered in Ireland and Vietnam, PEAK
Mexico and the USA team moving to larger HQ
premises, and the opening of the first office in
Germany

2019
With a headcount reaching 500 employees,
many offices needed more space which saw
PEAK China and Singapore moving to larger
premises in 2019. This was the year PEAK
Gas Generation was launched as a brand as
well as opening the first PEAK Scientific office
in Vietnam

Milestones
2020
While 2020 came with many challenges as a
result of the coronavirus pandemic, it brought
the opening of a warehouse facility called
Cartside in Inchinnan Business Park and the
acquisition of additional premises in Port
Glasgow which coincided with the launch of
the i-Flow O2 oxygen generator

Our Promise
Our commitment is to provide customers with a reliable gas generation solution that delivers long term value. We
achieve this through exceptional product design, and direct global on-site support that is unmatched in our industry.
We take a vested interest in customer outcomes and strive to be a valued partner in their success by delivering
exceptional service over the life of our product.