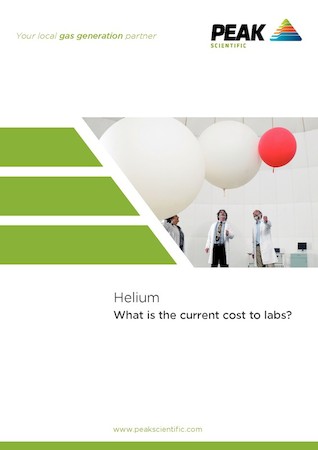 Helium - what is the current cost to labs?, ed's articles, article

Helium - what is the current cost to labs?

Helium
What is the current cost to labs?

Helium - What is the current cost to labs?
Ed Connor DR. SC.

almost doubled over the past 24 months5 meaning that although laboratories are not necessarily going to have to worry about sourcing helium, they may have to think hard about how they are going to pay for it. Prof Halperin, of Northwest University who testified at the Committee on Natural Resources oversight hearing in June 2015 voiced concern about availability of liquid helium for research purposes, stating that “as the price has gone up, we have been forced to choose between abandoning a research project or laying off employees and students”6.

GC-MS Application Specialist
The new helium surplus - At what cost to labs?
Talk of a helium crisis following the shortage of 2013 appears to have subsided thanks to increased worldwide production, with labs now readily able to obtain helium. Here we look at what has happened over the last 2 years since the global helium shortage was the hot topic in GC, where do we currently stand and what is the outlook in the short term?

Present perspective
One strategy that many labs are now employing is to look at using alternatives to helium in applications for which helium is non-essential. In gas chromatography (GC), helium, nitrogen and hydrogen are most commonly used as carrier gases with helium being the most widely used. Over the past 3 years there has been a great increase in information regarding use of alternative carrier gases with particular focus on hydrogen. The performance of hydrogen at higher linear velocities provides obvious advantages to laboratories that are looking to increase their throughput of samples without compromising on sample quality. One problem facing some labs is that the methods that they use are not approved for use with hydrogen carrier gas, or that performance is impaired when using hydrogen. These are obviously situations where it is essential for labs to continue using helium; however, by switching to hydrogen or nitrogen where helium is not critical to the method’s performance labs will find that they can conserve their helium for use in essential applications or methods. In the face of consumer pressure, the major manufacturers of GC have developed a number of new products to either reduce helium consumption, or to allow customers to use alternative carrier gases. Thermo have tested all of their GC products for hydrogen compatibility as well as developing a new split/splitless inlet which uses nitrogen for all purge and split flows, meaning that helium is used only for column flow7. Agilent were perhaps the most proactive throughout the helium crisis in terms of educating and enabling users to switch carrier gas and also developed a helium

Helium Auctions
A few weeks ago 275 million cubic feet (MCF) of crude helium were auctioned off from the Federal Reserve and sold to bidders from Air Products, Praxair and a small number of other companies for a total of $28.54M1. This auction followed a 2014 auction of 93 MCF of helium that was sold for just over $15M2. The auctions were mandated by the helium stewardship act (HSA) of 2013 which was rushed through US Congress in 2013 to extend the operational lifetime of US Federal reserve in Amarillo, TX. Increasing amounts of crude helium are set to be auctioned off from the Federal Reserve annually until 2018. A recent meeting of the Committee on Natural Resources in the US House of Representatives revealed that the large refining companies such as Air Liquide, Praxair and Air Products bought helium at inflated prices in an effort to stabilize their supply of helium as well as keeping smaller players out of the market3. Their strategy is apparently to sell helium refined from other sources such as Air Products’ new helium refinery at Doe Canyon in Colorado4 and to then draw on their Federal Reserve stocks when demand outstrips production. This strategy should ensure supply in the short-term, although labs will be conscious that the price of helium has

saver for GC-MS users which switches the supply of gas to the GC to nitrogen when the system is idle8. The other large GC manufacturers such as Shimadzu and Perkin Elmer have also been working hard to demonstrate compatibility of their systems with hydrogen and nitrogen carrier gas.

of research using liquid helium. Looking at the bigger picture in terms of helium distribution it is likely that if supply became more highly regulated, this could filter down to applications such as Gas Chromatography where its use is non-essential for a large number of methods, meaning that alternatives would have to be sought. It is likely that helium will be required for GC applications for a long time to come, but as its price continues to rise and it becomes harder to source, laboratories will face continued pressure to pursue alternatives wherever possible. Hydrogen is the most suitable alternative to helium for many analyses and it is likely to be adopted by GC labs because of its cost effectiveness and availability.

Alternative carrier gases for GC
The low price and availability of helium made it the default carrier gas for the majority of GC users over the past 30-40 years. Since the helium shortage of 2012/13 a number of GC methods that were previously restricted to helium carrier gas have been revalidated for use with hydrogen and nitrogen, giving labs the option to use cheaper alternatives to helium that are also available from gas generators. The Peak Precision generator range offers ultra-high purity Nitrogen and Hydrogen to supply carrier gas and detector gas, which gives labs the possibility to eliminate cylinders entirely. For any GCs requiring air for flame support, there is also a Precision Zero air generator that completes the Precision range. There are safety concerns from some quarters regarding hydrogen use, although many labs have been using hydrogen as flame gas for GCFID for years. One of the main concerns is the flammability of hydrogen. Hydrogen has a lower explosive limit of 4.1% in air, however, being less viscous than helium, it is even quicker to escape and unless a large quantity is rapidly released into the environment, the danger of reaching the LEL is relatively low. Hydrogen generators, which produce hydrogen gas on-demand from de-ionised water, are a safe source of high purity hydrogen. A hydrogen generator will typically contain less than a litre of gas at any one time, whilst being capable of supplying requirements of a small lab.

Short-term outlook
As we move towards 2018 when the Federal Reserve is set to cease sales to non-Federal users we will see how supply is prioritised. Prof Halperin called for a further extension to the operational lifetime of the Federal Reserve beyond 2021 to ensure the long-term supply of helium to researchers and for priority to be given to areas

Ed Connor DR.SC. is a GC-MS Application Specialist, Peak Scientific, Inchinnan Business Park, Scotland, UK . Prior to joining Peak in February of this year, Ed completed his Dr.Sc. at ETH Zurich in Switzerland using GC-MS to look at herbivore induced plant volatiles and their interaction with beneficial insects. He then joined the University of Zurich where his work focused primarily on volatile collection methods and analyses using GC-MS and GC-FID.